OK lets all take stock and use some logic here and I respectfully disagree with a few of the comments generally being banded about ! And i overall am unhappy about the general forum bashing as well as people may find a hint useful even though 'you' have not.
WPA-PSK / WPA2-PSK does not require an 'authentication server' per se as @leamanc has suggested.
Pre-Shared Key (PSK) Mode
The PSK mode is designed for home or small network use where an 802.1x authentication server isn't required. WPA-PSK works by regularly changing the automatic encryption keys authenticated between computers, your server or router and other devices that connect to it. PSK dramatically improves protection over WEP, as the encryption keys change very quickly, thus preventing intruders from gathering data to break encryption and into your network.
Now lets get to Encryption...
WPA tends to use TKIP and WPA2 uses AES encryption.
Both these methods Apple call WPA Personal or WPA2 Personal.
AES is preferred as it is more secure and recent exploits of TKIP have led to it being slowly phased out just like WEP which should not be used at all.
However WPA works with most older hardware where as WPA2 will require more modern hardware (6 year old ish)
Overall with modern Wi-FI hardware using 'n' protocol you need to ONLY use WPA2 with AES encryption to get the best speeds/throughput. But that is another story.
I do not really want to go into WPA2 Enterprise, RADIUS, 802.1X etc as this is just going to make it even more complex for people to understand and irrelevant for Home users as this used when connecting to Business/Enterprise networks.

I am going to expose an important topic on hacking knowledge that some of you might know and most of you don’t. When you’re going to hack a computer or server on the Internet, you won’t want your IP address to spill out. That’s because your ISP could easy trace you by two simple information which is the time and IP Address. So you’ll need to use proxy or even chains of proxies to avoid being directly traced by the victim’s firewall. If you think you’re safe hiding behind a proxy server, bad news is most proxy server has logging enabled and your IP address is definitely listed in the log file when you’re connected to it. It is possible that the administrator of the proxy server passes your information to your ISP and you’ll still get caught at the end of the day. Don’t forget, there are still some other important information that can be obtained from an IP Address if a person knows what tools to use. One of it is your network adapter’s MAC address.

Every network card contains a unique code called MAC address that is permanently assigned to it, similarly like every computer requires a unique IP address to be connected to a network. Although these information can be configured to have the same, it would cause conflict and connection problems. To view your network card’s MAC address, just run the command “

ipconfig /all” in command prompt and refer to the value of Physical Address.

In another scenario, some people may still be using WEP encryption for their wireless network because some old devices don’t support WPA. WEP encryption is very weak and can be cracked in less than 5 minutes using BackTrack Linux. Most of the time they’d also enable a second line of defense which is the MAC address filtering to only allow authorized devices to connect to their wireless network but they’re wrong. A hacker can easily find out the authorized MAC address, change their network card’s MAC address to the authorized ones and poison the ARP cache to prevent the owner’s machine from connecting to it. Here’s an example of Belkin Play Max F7D4401 v1 router. It has a MAC Address Filtering feature where you can set up a list of allowed clients and use the wireless connection.

Other than that, some time limited shareware such as Hotspot Shield that uses your MAC address to keep track of the free usage. If the trial period has expired or is pending to reset every month, you can easily bypass this restriction by changing your MAC address. I bet by now you should know the power of spoofing your MAC Address. MAC address can actually be changed directly from Windows but the easiest way is to just a free program called Technitium MAC Address Changer.

To change your MAC address, run the program, click the Random MAC Address button followed by the Change Now! button. The update takes effect immediately without a reboot and stays intact even when you boot up the computer tomorrow. To restore back your original MAC address, click the Restore Original button on Technitium MAC Address Changer program.

To manually change your MAC address in Windows 7 without using a third party software, go to Control Panel > System > Device Manager. Expand Network Adapters and double click on the network card that you want to change the MAC address. Go to Advanced tab and look for Network Address in the Property box. Click on it and you can specify your own value with any random 12 characters of letters and numbers. 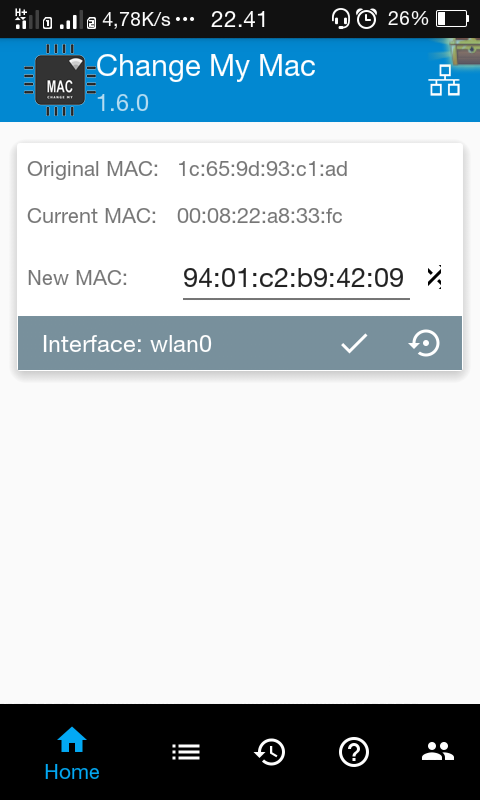 The Technicium Mac address changer has certain restriction in some cases (particularly Wireless connection) such that we should use only ’02’ as fist octet of mac address (as you can see a checkbox in the tool). So, it seems it is not possible to completely spoof your mac address as another PC’s mac address. May be we can play with, by just hiding behind some random mac address.

spoofing the MAC randomly every few minutes may be more useful.

If you’re behind a router, your ISP only sees the router’s MAC addy. That’s the one you should change.
Regardless, if you have a home broadband connection, you might have a hard time arguing with your ISP since they tie your IP to the modem id.